A (w)hole lot of waiting 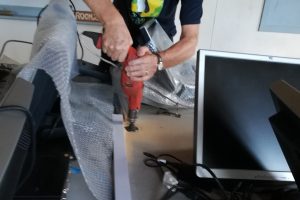 We wanted to have everything installed and done with by Tuesday evening. However, it turns out the computers, or rather the motherboards, aren’t identical, which means Michael still has to tinker with the installation. We hope the problem will be solved by the time he leaves.

We decided NOT to lay the both network electric cables underneath the tables, so the cable ducts needed to be put on top instead. Easier said than done – Richard had purchased the plastic cable ducts and Mike tried to locate some matching screws in order to fasten them on the tabletops. There was nothing to be found in the convent itself though, so we took an Uber cab to the hardware store located downtown to get the necessary parts, which were about €2.50 in total – a lot cheaper than what we paid for getting there and back!

Fortunately the carpenter on site had a saw, allowing us to trim the ducts to the right length. Though we still needed to get three holes drilled into the tables so we could install the electrics, and neither had a drill nor matching drill bits anywhere. Finally the electrician managed to get the tools we needed from somewhere, and Mike (who’s an amateur carpenter himself) helped out with the work.

Birgit and Werner fastened the ducts and laid the network cables, and Mike started tying together the individual electric wires underneath the tables. After that, we needed to bundle the leads for the computers and monitors, so as to avoid having a heap of tangled wires on the tabletops.

But enough about work. On Sunday we went for our annual ice cream date at Java in the Garden City Mall (about 5km from the convent, but we needed 30 minutes to get there because of traffic!) and in the evening we put on the movie “Sister Act 2”. Then, on Tuesday, Birgit and Werner went to visit two schools in the neighboring Mathare slum along with David Hastie from the local Rotary Club. The visit left quite an impression – we really are on easy street…