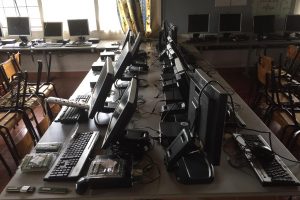 The last couple of days were full of work… LOTS of work. First, we moved all the old desktop PCs aside and replaced them with the new, smaller machines. But as we were doing so, it turned out that the old English power strips had stopped working, due to all the German plugs having been forced into the sockets in the past. Meaning, they needed to be replaced. Also, the layout of the network wiring wasn’t ideal, and the team decided to remove all of the LAN cables and lay down new ones. In the meantime, IT teacher Richard managed to locate a hardware store that had 20 new power strips with 6 sockets each available, and the team ended up making a purchase.

So Werner and Mike went crawling under the tables to get the job done. Everything turned black – their hands, their clothes, not to mention the potential blackout when they banged their respective heads. There were heaps of dirt on the power strips and cables. While the two were busy, Birgit meticulously cleaned the keyboards and monitors – from now on, we’re going to emphasize that this kind of work needs to be done on site on a regular basis. Michael also got started installing the new computers, and once the network cables and power strips are all replaced at the start of next week, the IT room is going to fully updated. It might not sound like much, but you definitely feel your back after this kind of work.

In the evening, we watched a German version of “Dinner vor One” (with English subtitles added by Mike) and some other videos. Same procedure as every year.