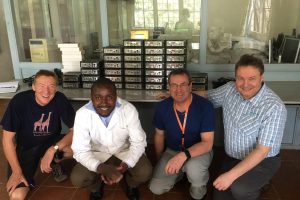 As we‘ve mentioned previously, quite a few of the “long-serving” computers in Ruaraka need to be replaced to assure that IT teaching at St. Scholastica Catholic School may continue. Michael Schmelzer and Werner Buchholz had made a great job of prepping the exchange. The new server hard drive was all ready, and Michael had obtained a further 36 drives for the exchange, all of which had been packed into boxes and readied for air transport. Birgit & Michael “Mike” Scholtz went to the airport in Zürich one day prior top departure to check in two of the three boxes, just in case there were any problems during transport with Swiss airlines. On departure day, Michael & Werner flew in from Frankfurt to meet Birgit and Mike in Zürich.

Then, something outrageous happened. As the flight was booked solid and there had been problems Werner’s seat reservation, both he and Michael had to get up and “grudgingly” take a seat in business class. Well – good for them.

After touching down at Nairobi airport, the four awaited for the boxes of computers to arrive with bated breath. And lo and behold, even all the baggage that had been checked in back in Frankfurt arrived in full, in complete contrast to the experience from previous years with Turkish Airlines. After paying a substantial fee to Kenyan customs, the four were collected by Sisters Paula and Rosa, who drove them to the convent. Following a quick dinner in Ruaraka, everyone went to bed, as they would have to be up early in the morning.

The following day, the new hard drive was installed into the server and the first computers (also known as “clients”) were installed as well. However, the printer, which needed new cartridges, simply wouldn’t work, meaning that new drivers would most likely need to be installed. There’s enough work to be done.