Getting ready for our 2020 Kenya trip 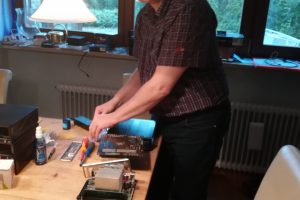 Following our stay in Kenya in January 2019, Michael Schmelzer got to thinking about how we could get rid of all the failure-prone hardware in the IT classroom.

So he put together a small client computer and showed it to everyone at one of our meetings. Sure, there were a few concerns, such as the client being too small or could easily be stolen and used for other purposes.

Michael, though, kept a cool head, and kept pursuing the idea he had.

He presented his idea with using new hardware again at another meeting, and found supporters who were convinced by his plan. One of the persuasive points was that the small computers could be brought over to Kenya in peoples’ luggage, meaning there was no need to spend anything on transporting pallets.

Michael finally received the OK for a few small clients and started to gather the required material, as well as order further material as needed.

He always kept the board informed and notified as well.

After the Summer holidays, Michael and Werner got to putting the clients together. They finished up after three sessions. Werner obtained the last missing power supply units and put them with the client computers.

Now, it was up to our packing master to distribute the clients into several different packages which would not be over 23 kg, as required by luggage restrictions on airplanes. Werner did the job, putting both the PCs and power supply units into 3 boxes and preparing them for the trip using stretch film and pallet bands.

2 of the boxes were handed over to Michael Scholtz at a board meeting in Constance.

Finally, HP helped us put the new mirror onto the server HD. Michael Schmelzer updated the new client as well.

Now, we were fully prepared and ready to set off on our trip to Kenya.