The Light at the End of the Tunnel 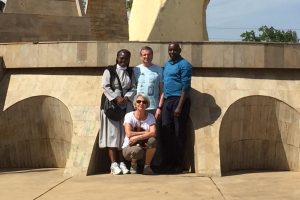 The team’s stay is slowly approaching its end. While Birgit mainly took care of the kindergarten and the library (unfortunately many books are old and worn-out), Werner and Michael did the last installations. The biggest problem in the convent is still the Internet connection. Downloading the software update of only 485 MB for Sister Lucy´s laptop took five hours with the Internet breaking down repeatedly, which certainly gave Michael a headache and grey hair. It was like the power failures at Chesongoch, but unfortunately there is no “internet generator” to bridge the failures.

Then Werner could help Richard to have an “aha-experience”. To restore the Educlient backup on two computers in the classroom was not possible – the keyboards didn’t work. The computers were those Baerbones which only go with PS2 keyboards, and of course USB keyboards were plugged in. We had discovered this, however, when installing the Baerbones for Endo, and after a quick modification the little blue machines were now working smoothly again. Richard would probably have discarded the computers as we had nearly done earlier.

IT room 1 is now completely empty and, as Richard remarked, really clean. The LAN lines in the server room have been removed, the hardware scrap has been disposed of and the many switches are stowed away. Next year we will have to deal with IT room 2, i.e. re-route the LAN lines in order to reduce the number of switches as much as possible. Michael had mainly seen to the tidying up and created a “to-do-list” for Richard (Sr. Lucy has a copy) to organize the material and stow it neatly. He also managed to get one of the inkjet printers up and running. The ambitious attempt to bring the second printer to life (it has an identical print head) failed with the result that then even the first printer didn’t work anymore. If only he had listened to Werner: “Never change a running system”.

Meanwhile several employees of the company that is in charge of the tablets had arrived in IT room 2 to install an app on the tablets – one after the other! Their enthusiasm will probably wear thin when the number of tablets rises to the target of 500 (currently there are about 200). Werner connected an access point to Server 2, enabling the tablets to access Wikipedia, Zarafa, etc. via Firefox. It worked great.

The team took half a day off to see some of the surroundings. They had excluded a visit of the Nairobi Reserve, whose entrance fees (for Muzungus = whites) are outrageously high – then one should rather go on a photo safari for several days. So they chose the Freedom Park (Uhuru-Gardens), which was quite nice. Since there is a Hindu temple nearby they decided to visit it, too. The director of the complex not only allowed the visit of the huge complex with attached school and hospital, which was financed by wealthy Indians, but also explained the individual rooms and functions. It was very clean with marble and ornaments everywhere. Birgit and Sister Paula were

given a handful of various fruit as they left the “female part of the temple”. Overwhelming and impressive!

The farewell evening was very cheerful; there were pizzas again, the sweet wine from the box (the good red wine from the bottle obviously didn’t meet the taste of the Sisters) and the last Tusker canned beer. The team was again given presents (coffee, T-shirts, scarves) and bid farewell with the request to come again next year.

The drive to the airport was as stressful as usual; although they left the convent early, they were immediately stuck in a traffic jam and needed a good half hour for about 500 m out of town. It went on stop and go, but due to the new bypass road the city centre of Nairobi can now be avoided on the way to the airport. And so the team arrived early enough for check-in, was able to take the excess hand luggage through the security checkpoints without any problems and then flew back to Zurich via Dar es Salaam.