Of ‘Double Mokka’, Mice and Projectors 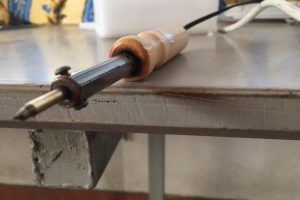 Most of Saturday morning we concentrated on the aches and pains of the Sisters’ laptops. A slow machine here, an overcrowded hard disk there. The laptop of Sr. Maria, who is now in Tanzania, was given Windows in Karen and the divice “thanked” with a long boot time until finally the Microsoft logo appeared on the screen. This clearly showed that an old 32-bit machine with only 1 GB RAM is just not a fast one to start. FreiOSS people advise: buy a new Computer with Windows; and the laptop is set back again on Ubuntu and can thus spend its “twilight years” usefully.

Sister Rosa’s external hard disk obviously conked out finally; all attempts to rescue it failed. But since most of her data is still on her computer, she was able to cope with the loss relatively easily. This journey seems to be overshadowed by “data loss” – fortunately without total loss. Sr. Lucy fared better, her notebook did its job again after cloning the HD and “purification” and time-consuming treatment with Gparted.

Speaking of damage and damage control: when Michael Schmelzer left, we stated the loss of 18 desktops. But the team worked meticulously and was able to reduce the number to 5, i.e. 13 machines were working again after being repaired and transferred from IT room 2. This room is now empty (probably had not been used anyway).

The days in Chesongoch and Endo were exhausting with little sleep in the heat, with running, noisy generators next to the guest rooms, as Kenya-Power once again could not maintain the supply. But then the convent in Ruaraka had a little surprise in store for Birgit and Michael. Because, probably through the open window, a mouse had found its way into their room and had busied itself with an open bag of nuts. Despite an intensive search, the creature could not be found. In the middle of the night they were awakened by an object falling down in the bathroom; the mouse sat on the shelf above the sink – a sports mouse obviously with the ability to jump and climb. But then it was put to the outside.

As usual in Ruaraka, Saturday was Java Day. So the driver of the convent took us, together with Sr. Paula, to the Garden-City Mall. There we met Sr. Emily and Gloria (adopted daughter) in the Java-Restaurant and had a good chat with them. Sr. Emily hadn’t forgotten since last year that Michael’s birthday is in January. So she surprised him with a birthday muffin. After we all had had our “Double Mokka” or “Double Espresso” shake, we went back to the convent with the Uber taxi.

And there was still the projector that didn’t work anymore. Werner soldered the torn wires artfully together again – he used the soldering iron, which turned black after soldering for 10 minutes and is probably no longer usable (disposable soldering iron with limited use). At least the projector was working again, but with a small redshift in the spectrum of the light beam. In addition, the fan didn’t seem to run properly. Let’s see if this can still be repaired – maybe we’ll take the device back to Germany.