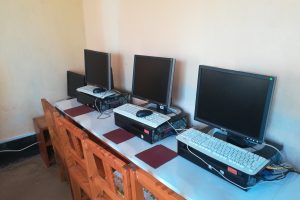 While Sunday and Monday was spent with the usual work like installation of the remaining computers and preparation of the hardware for the Kerio Valley, we set off early on Tuesday for our trip to Chesongoch. The “Easy-Coach” brought the group to Eldoret with a stopover in Nakuru and the equator crossing. There Sr. Judy was already waiting for us with the off-road vehicle and we started on asphalted roads (the Chinese have already “dealt with” quite a long stretch) and then down on bumpy roads into the valley to Chesongoch. Here we were awaited by the Sisters Liliane, Rita Maria and Angela.

The working day in Chesongoch consisted of changing the HDDs at school and configuring the access point for the convent. We had also brought 4 notebooks and a barebone desktop, which we installed in the adjacent hospital. All this went more or less smoothly and now the Sisters can communicate with the outside world in a better way. Sister Angela was particularly praised by the team as she has most carefully handled the computers entrusted to her. Except for a few ‘mice’ that had given up their jobs, everything went fine after installing the new hard drives.

The trip to Endo on the following day proved to be a tough test for Michael. Since we were seven persons in the 5-seater off-road vehicle Michael and another person had to sit back on the loading area on a bag of potatoes. The request to drive carefully in order not to damage the transported hardware was heard by the driver, but obviously not understood. One must have seen the “roads” to understand how the two were shaken on the loading area. Michael couldn’t help but give the driver his opinion about the promised “cautious driving style” after half the distance – and suddenly things went much better.

Actually the installation of the access point in Endo shouldn’t have been a problem. But the deal was made without Safaricom (the Kenyan equivalent of German Telekom). The necessary SIM card for the UMTS stick was loaded with sufficient credit, but not enabled for Internet traffic. It took numerous telephone calls to finally connect Endo to the Internet. And so the group could not return to Chesongoch at 1.30 p.m. as planned, but only at 3.30 p.m. Michael also had the misfortune to “bend” the USB stick, on which Werner had laboriously stored data, when manipulating the barebone. “Hopefully all the data can still be found on the computer in Ruaraka,” was the first thought. “Shit happens!” But we were lucky, because many files were found on the notebook left behind in Ruaraka; the rest is on hard disks at home.

Fortunately we could also welcome Father Florian, who was visiting the convent of the neighbouring Benedictines. So it was possible to give him the laser printer, which had been sitting in Ruaraka for one year ready to be picked up; now he can take it with him completely configured so that he will be able to print with his notebook in Illeret.