Yet they do work 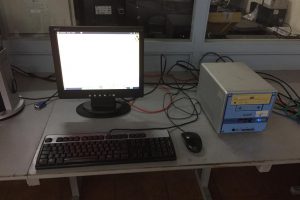 Since we are going to Chesongoch on Tuesday, we first concentrated on making the notebooks and two barebone desk computers work. Whereas the notebooks went smoothly with Ubuntu 18.04 (with a little “forcepae” as mentioned before) there was a problem with the ACER monitors which, controlled by the barebones, showed an unreadable image on the screens. We were already exchanging the grub.cfg file of the new version with the old version on HP’s advice when the computer that Werner and Michael had already installed via network showed a perfect picture under the circumstances. When we finally found out that the computer could only be activated with a PS2 keyboard instead of a USB one, everything went according to plan. Computers are just “magic bags”. So we could take three more computers from the “infirmary” to the computer room.

IT has captured this school, too. Lines for surveillance cameras are being installed and the school will also be equipped with WLAN. It is expected that every new year will start with tablet computers – in a few years the number of users will increase from 150 to over 500. Therefore, a company was commissioned to install a sufficient WLAN for 1000 pupils. Then all we’ll have to do is attach our server to the router and you can read Wikipedia on the tablet, exchange emails and much more.

We experienced another eye-opener. While trying to rescue the beamer bulb of the defective device from the computer room (we had only had it brought to Ruaraka via Tutzing last year), problems with maintaining technical equipment became obvious. Someone had pressed the spare bulb into the socket in such a way that the connecting part had broken off. In addition we found that the line for the fan was cut through and then wrapped in insulating tape. The attempt to solder the wires together again failed because there was no soldering iron. The electrician called in promised to get one quickly. The question as to whether he could handle soldering irons for electronic components was answered that he had never soldered before. It is frustrating when the material is handled in this way.

The number of hardware to be scrapped or sold has already increased considerably. Most of them are partly cannibalized desktops. Some old monitors can be found on the “for sale” list. We will reimport the still usable RAM bars and 64bit CPUs.

On Saturday a movie night for the boarding school students was scheduled at short notice. There were ‘Beauty & Beast’, ‘Back to the Future’ and ‘Harry Potter’ to choose from. ‘Harry Potter’ was shown following a vote among the students. And to the delight of Michael & Werner, the audio system worked perfectly this time – even though it took some searching for the right connection cable.