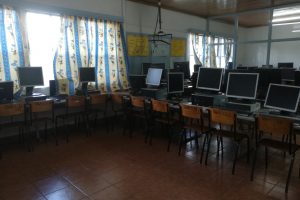 First Michael was shown the grounds and the various facilities on the site of the convent in Nairobi. Then Michael was introduced to the IT teacher Richard, who was pleased to see us, and the classroom was inspected. We quickly realized why. Many devices are unplugged or have problems to start.

So let’s get to work. The new server hard disk was installed, the network interfaces were set up correctly and the first test installation could be started. After the installation, the network card was set correctly on the client and we immediately had a connection to the server.

Michael was concerned about the slow speed during the client installation, so he started to examine the network. There are simply too many switches on the way to the IT room.

Werner found the connection from the server to a switch in the classroom and so Michael started to rebuild the network.

After the network was rebuilt and Richard had controlled the first client we had the possibility to install more computers. But the hardware proved rather stubborn sometimes. After the installation it just didn’t want to run anymore and resulted in a kernel panic. Yet Michael found a solution. He created a bootloader script in which all necessary information is contained. This script has to be executed after the installation and all computers run as they should.

But a further surprise was waiting. We had installed computers and two days later they failed. The current situation is as follows: 35 computers are running and 13 computers do not work. When enough computers were running, Michael took care of the ones that did not work and Werner made an inventory of the two cabinets in the IT classrooms.