One Michael follows after the other 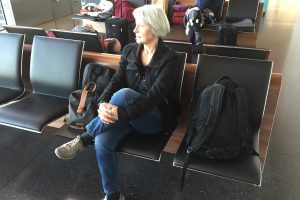 The flight from Zürich to Nairobi was without problems. After the plane was de-iced Birgit and Michael could enjoy a journey without any turbulences. Only shortly before landing, the landing gear was extended with an unusually loud noise, the Boeing suddenly took off again. Some uncertainty spread until the pilot explained that another plane was blocking the runway. Passport and customs checks were carried out quickly and without problems, and so the reception trio consisting of Sister Lucy & Sister Rosa as well as Werner welcomed Birgit and Michael. Meanwhile Michael Schmelzer sat in the departure hall to board exactly this plane back to Zurich – with a stopover in Dar es Salaam/Tanzania.

On the first working day Werner gave Michael an overview of the technical situation at the school; which was described here before. They immediately started to activate the devices, which were still in an acceptable condition and could be integrated into networks. There were not many of them. At the end of our stay, we will know how many computers are actually running reliably in the IT room, currently about 36 desktops. The laptops that Michel Pecchia had donated have all been installed now, partly thanks to the “forcepae” command and ready to be transported to Chesongoch. This trip is planned for Tuesday next week; we’ll go there by bus and back by plane. We’ll stay for two days to get the UMTS supported Internet up and running and to equip the newly built but little used visitor center with two standalone desktops. So far it has been quite difficult, though, as the older barebones, which are intended for this purpose, don’t get along well with the available monitors. We’ll be working on it.

Considering the increasing hardware failures, it was discussed with Sr. Lucy (administrator), Geoffrey (director) and Richard (IT teacher) whether the IT room is still needed at all, especially since the resources of Linux4Afrika are coming to an end. It became clear that this offer of the school represents a so-called USP (Unique Selling Proposition), which one does not want to do without. In this context the fact is important that the tablets, which are increasingly available at school, belong to the children themselves – they are mainly used to collect information from the Windows notebooks that serve as servers – so it’s not really IT lessons. So there is need for talks and some ideas that should not be detailed at this point.

The area in Ruaraka has changed a lot due to the extension of the connected hospital. It is expected that the shell will be finished by the middle of the year and that the demand, especially for complicated deliveries, can be met.

There has been “Movie Time” for the Sisters twice , because HP had provided an HDD with numerous films, which Michael had supplemented with some videos and copied onto a small disk. Excerpts from the Advent concert in the Frauenkirche in Dresden, Germany, the “Halleluja” with Helene Fischer were very well received. And “Victor Borge” made the community laugh heartily (you can also watch it on YouTube!). On Sunday, “Harry Potter” will be screened in the school auditorium.