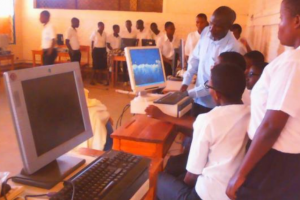 In spring 2012 (!), computers were disassembled and reassembled again on a Saturday afternoon in the “Computerhotel” of Linux4Africa at the Linux4Afrika warehouse, also hard disks were exchanged and tested. 80 computers and monitors, keyboards, mice and all kinds of computer accessories were packed and went on a long voyage to Africa in a container in May 2012.

The computers were meant for the so-called peace school “Ecole Mahoro” in Burundi. Located in the hills of Burundi, this school is a school for the rural and poor people of this country.

The computers arrived at the peace school in rural Kimina in October 2012 after months of travel. However, the peace school did not have any electricity at that time, but African optimism convinced that this will soon change with the often bright sunshine of Africa.

In March 2015, i. e. two and a half years later, the Burundi team sent Eschbach solar modules, which were purchased in Cologne and were to be professionally installed by a Rwandan technician trained in Germany, to Burundi. Three days after the arrival of the modules, the said man from Kigali was to land in Bujumbura, but the plane arrived without him – he did not come because of the situation in Burundi at that time. For example, two Burundians, who had already assisted him with the installation in the past, were to take over the installation under his telephone instructions. They did, too, but after assembly, the modules only produced 17% performance, which was insufficient for the computers’ ability to run. Further tests did not yield any more performance either.

After a long time a Burundian specialist was found, who brought the modules to a performance of 100%. As proof, in October 2017 we received photos showing the full performance and enthusiastic students working on the computers.

You can see that in Africa everything takes longer, but you must never give up hope, and then it will work someday!

The complete report including pictures is available as a PDF document (German only).