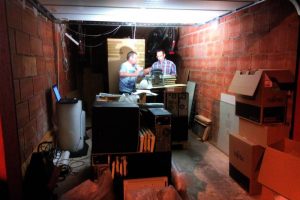 One and a half years ago, our member Peter Diez went to South Africa for vacation. It was there that Vuyani, a hiking guide of the Pondoland Walking Safari, made contact with a school in a rural area on the east coast near Lusikisiki. The idea was born to set up a PC room with donated PCs at the school.

Since we couldn’t use the warehouse at the Freiburg Fair any more, we had to think of an alternative storage option and collected PCs in private cellars, rooms or even living rooms.

For about a year we had collected PCs from different sources. By renewing the PCs in the FreiOSS.net training rooms, we were able to use some of the old but still working PCs for the South Africa project. In addition, we received 30 monitors, 13 PCs and various accessories from Grimm Küchen in Freiburg, which renewed their IT (thanks guys!). From the Physikalisch-Technische Werkstätten Dr. Pychlau GmbH in Freiburg we received 10 PCs with monitors and all accessories – also a big thanks to you!

At the moment there are three pallets with 47 desktop PCs, 74 monitors and a lot of accessories and cables in Werner’s garage; these will be picked up in the coming weeks to embark on the ship’s voyage to South Africa.

For shipping the hardware we are fortunately able to rely on contacts of the organisation Co-Willing, who take over the transport financially and organisationally. Co-Willing is an international organisation committed to good governance and sustainable development in Africa. A great gift that these contacts have arisen.

As soon as the PCs arrive in South Africa, Peter and Benny Rybalkin will fly there to put the PCs into operation with the local contacts.

A special thank you to our treasurer Werner, who made the packing of the PCs and until further notice also the storage of the packed pallets in his garage possible, to Peter and Sebastian and all freelancers, who are actively involved in this project! 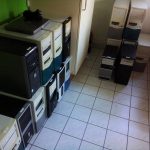 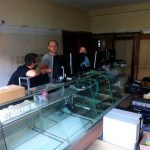 Commissioning of PCs in Sebastian’s rooms 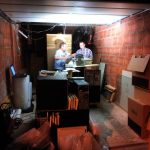 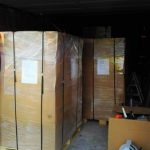 The pallets for South Africa were collected by the Swiss forwarding agency. With this, Werner can now use his garage, which has been used for several weeks, again for his car. Tomorrow the containers are due to embark on their journey to Cape Town. 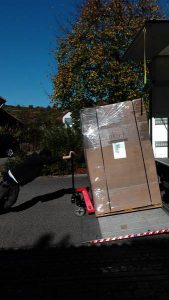