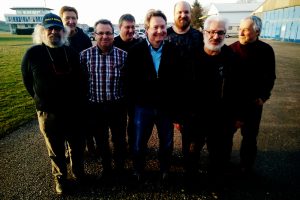 The Linux4Afrika project has been supporting schools, universities and educational institutions for over ten years with a system based on Linux and open source software. In order to continue providing this assistance, it is important to pass on the knowledge to the next generation. With the new Linux4Afrika task force under the direction of Werner Buchholz, the project makes an important step towards the future.

On March 11, 2017, the new Linux4Afrika task force meets for the first time in the club house of the ham radio club at the airfield in Freiburg, to set up a fully functional sample installation for each member of Task Force. Based on this setup, the sample solution will be further developed, the documentation updated and the training on-site administrators prepared.

HPM, Andreas, Werner, Michael Schmelzer, Ecki, Frank, Sebastian and Franz meet at the Funkerheim from 10:00 am and start building the hardware for a server and several clients. Michael Scholtz, who was in Kenya at the beginning of the year, also joined from Constance. 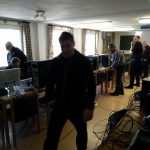 The test environment of the new Linux4Afrika task force 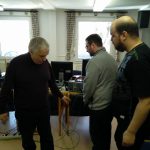 HPM, Sebastian and Frank setting up 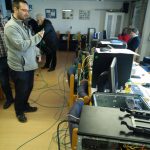 The ham radio club had their annual members meeting the day before, so it looks rather bad with beverages on site, so Franz simply brought some. But oh no! The most important is missing: Coffee! Since Michael is already an hour too late – thanks to the Deutsche Bahn – and Florian is picking him up from the train station, a short text message helps fixing this issue.

The topics that HPM is passing on to the next generation is not for beginners: Bridging Setup, Bandwidth Requirements, Subnetting, PXE Boots, Rom-O-Matic etc … Furthermore, he reminds the task force of problems which one does not think of at first glance in an industrialized world:

For lunch there is Pea Pot German Forces Style , self-made by Florian. This reminds one or the other of the military service … 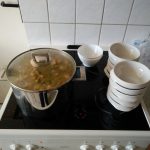 The soup is ready soon 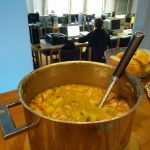 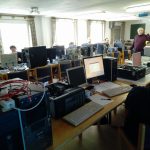 The soup comes very well, and well saturated the team can continue with the next topic: the client installation. When it comes to the first practice part, namely, the ramp-up of the clients, we are directly confronted with a problem that one does not want to encounter in the seclusion of an African village: A kernel panic. The cause is obsolete hardware: The affected system still uses DDR1 memory or a processor which does not support Physical Address Extension (PAE) yet. However, PAE kernels are standard and a hard requirement in the Ubuntu versions that we use (currently 14.04). The computer is thus a case for the recycling yard. A misfortune rarely comes alone, and so the next problem emerges. Another computer does not run. But the problem is quickly found: There is no hard drive in it! 🙂 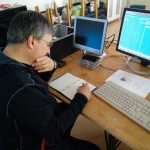 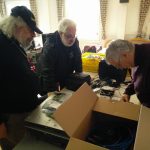 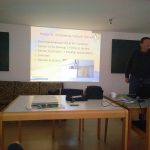 Michael reports about the project status in Kenya 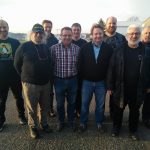 The board and the new Linux4Afrika task force

The aim of today’s meeting is not only to transfer the knowledge to the new task force, but also to bring the documentation up to date. In the sense of “shared suffering is half-suffering” it is everyone’s turn at some point: with every topic change, there is also a documentator change. In the next step, we will consolidate everything at a central location and store it in our NextCloud, so that the team will be able to access an updated documentation during the next Africa visit in early 2018.

By the way: The new task force will be introduced to our friends in Africa in 2018. We send three people to Kenya to carry out an introduction and delivery on the ground. This, of course, costs money, and so we are organizing a fundraising event (unfortunately it’s in German only):