It doesn’t always have to be about Linux… 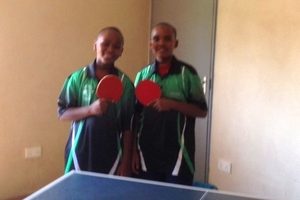 Fridays are half days at the school. After lunch, all the students go to do aerobics. Michael had brought over a suitcase full of new jerseys and shorts from his table-tennis club as there’s a table inside the auditorium. As chance would have it, he met his match that day, namely Stefanie Seiz, who works with street kids in the neighboring slum. A tough lady, not just in her job but also in table tennis. Michael was soundly defeated, managing to win only 2 of 11 total sets. After the game, he gave a quick table tennis lesson to two students who seemed interested, also giving them jerseys and motivating them to stick with it. Then, in the evening, it was time for movie night again.

Birgit’s morning was spent buying food on the market with Sr. Rita – standard friday morning business. Traffic seems to have increased again as compared to previous years as well, given that, for example, they had to wait for about 15 minutes at a roundabout before being able to drive again. But it can get even crazier than that, as you’ll see below …

During that time, Michael was experimenting with the solar oven at the school. The temperature went up above 100 degrees within 10 minutes, and after roughly 15 minutes the water it held was hot, perfect for boiling rice. It would be amazing to see these devices rolled out more, especially in areas where there is little vegetation to curb logging activity.

Cooking meals with the power of the sun

The north of Kenya, where Father Florian is working with the Masai, is currently suffering a drought which has led to crops failing. Much of the livestock in the area perished as a result, which in turn has increased cattle theft and caused clan feuds. The streets and paths to the northern Rift Valley aren’t safe, and so the planned visit to the outpost up in Chesongoch is looking unlikely.

On Saturday we went on a day trip with Sisters Emily and Rosa as well as our driver Peter (who once again managed to show up an hour late), heading towards the city of Nakuru which is 2 hours north of Nairobi on a regular day. After visiting a prehistoric dig site (after all, the oldest known human being was found in Africa), our group drove to Lake Elmentaita, which is usually home to flocks of flamingos and pelicans, although their number has greatly decreased over the past years. 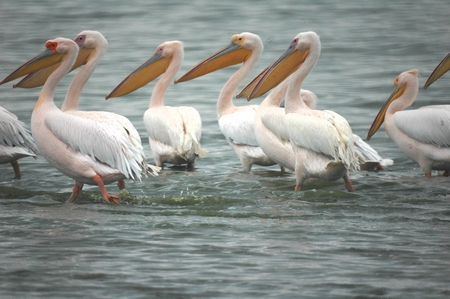 We spent the afternoon break in the Sunbird Lodge, where we had the distinct feeling of being on safari, before going on a search for the Menengai Crater (the 2nd largest in the world). It was a search because, although we did find the crater, we didn’t find the viewpoint and landed right in the middle of Geothermal Project Kenya instead.

While the car journey from Ruaraka to Nakuru had taken about 3 hours due to the many trucks on the road, the journey back took much longer. Everything was backed up because of a toll station for the trucks, and the oncoming traffic simply took over the entire road. It was a total standstill, cars all bumper-to-bumper, some even facing each other. 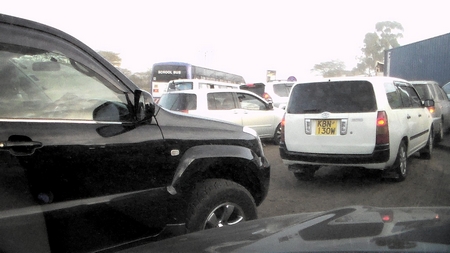 Traffic jam between Ruaraka and 055

A 2-lane road turned into a 4-lane car park, until the vehicles heading towards Nairobi decided to go through the terrain on either side of the road to the end of the jam. The two policemen trying to direct traffic were powerless. It’s high time they finish building the railway line from Mombasa via Nairobi to Uganda…