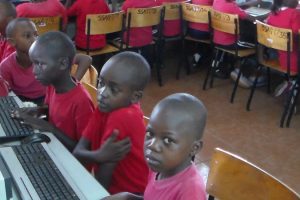 After managing to overcome the last few technical difficulties thanks to Hans-Peter and having Stefan further initiate the sisters into the “secrets” of Libreoffice, Firefox etc. over in Karen, we were ready to set off on our way back to Ruaraka on Thursday afternoon. Sr. Christiane decided to join our travel group, and this time round we were taken right through the concrete jungle of Nairobi (on the way to Karen, we’d gone around the city so as not to get stuck in traffic).

We’re mostly done with setting up the computers in the school, so now we’re starting with our tidying up efforts. Altogether we’ve whipped about 120 PCs back into shape either by way of re-installation or via updates, and we’ve also re-run all the cables through classroom 2, so IT teacher Charles was able to start his regular classes again.

And we’ve also started funcionality testing all the remaining hard- and software, either setting it aside for backup (so Charles can replace anything that breaks down without a problem) or chucking it into the recycling pile.

Friday is the day the sisters always go to buy food from the market; Stefan decided to tag along this time round. Being quite tall and much whiter than everyone else, he naturally stuck out like a sore thumb, the market criers greeting him with “Jimmy” and “Hey American”. Then, in the afternoon, he went for a ride-along on one of the buses that takes the students home after school, so he got to see what some of the residential areas in the city looked like, as well as the slums – St. Scholastica Catholic School has taken on a number of children from the more deprived areas of the city, where the parents are unable to afford school fees.

In the evening it was movie time for the students. The movie we went for was Ice Age 4, Michael having just bought it from the Thika Mall a few hours before. We set up a screen, projector and and laptop in the school cafeteria, and then we were ready to start the show. The room, just as in previous years, was jam-packed, the students giving the characters on screen their undivided attention. And no power outages or other mishaps this time round either. Then, during the final 30 minutes of the film, a heavy storm suddenly hit Ruaraka, the heavens opening up and rain pouring down – so much of it that the students were forced to stay back after the end of the movie and wait before they could head back to their dormitories. And of course the question came up of what movie would be on show the following day………

Stefan was up early again on Saturday as he accompanied Sr. Emily downtown. All the while, Hans-Peter and Michael went to work on the remaining outdated computers. And after dealing with defective HDs, lids of the Acer machines being stuck (trying to jam the things back onto the computer casing is enough to drive you crazy!), terminal command lessons (Linux is, quite simply, very different to DOS), power outages (a nearly completed installation out the window), Fr. Florians toughbook and printer issues, a long day finally ended. 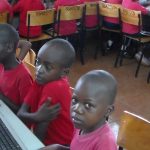 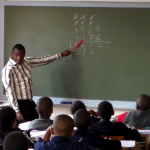 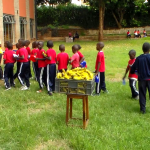 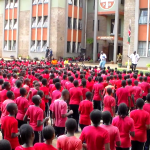