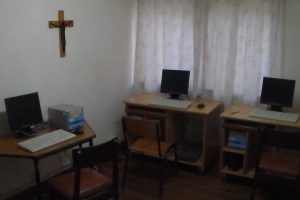 The priory of the Benedictine Missionary Sisters is located in Karen, a fairly upscale suburb just west of Nairobi. It’s the central administrative center for all of their organizations in Kenya and also the place where their novices are sent for training.

We were here to set up computers in the computer room in the main building, as well as in the guest house. The prioress, Sr. Michael-Marie, had requested seven desktop PCs, as well as four notebooks in total. We were off to the priory very early in the morning, with our driver Peter opting to take a detour in order to avoid all the traffic in downtown Nairobi, and so we arrived in roughly an hours’ time.

Our first order of the day was to tackle the computer room in the “Subiaco” guest house – and get rid of all the old machines in the room. Our plan was to replace them with the barebone setups we’d brought with us. Those, despite having been tested back in Ruaraka, ended up giving us a hard time at first, meaning it took us around 3 hours to get them up and running, Internet connection and all. Michael’s on a warpath against all things with barebone computers as well as a result. But at the end of it all, Sr. Jacintha, who’s managing the guest house, was very pleased with our work. By the way, in case anyone out there is looking for a place near Nairobi where they can spend a quiet night where they’re well looked after, we can recommend Subiaco. The entire complex is a real horticultural highlight.

We’d learned a few things from setting up in the guest house, so the installation in the main building’s computer room was fairly quick and painless. Well… apart from the extension plugs and power cords that were missing. But we headed out to buy them in Karen along with Sr. Michael-Marie, who kindly drove us, and once we’d installed everything we were able to coach the first group of novices, on four computers in the main building (Michael) and three in the guest house (Stefan). This group hadn’t used computers all that much before, but they were highly motivated. Things we highlighted included LibreOffice Writer and Firefox, practicing basic functions such as “cut/paste” and “save/save as”. And they all had a real moment when we steered them towards the Vatican homepage and they discovered the wealth of information it held.

The second group of trainees showed up after dinner… and they were all a lot more experienced in terms of computers, meaning our help wasn’t needed all that much. What they found a lot more interesting was the amount of programs Edubuntu offers as well as their uses. Training will resume tomorrow, and we’ll more likely than not manage to eliminate the remaining little technical problems we ran into, once our Linux guru Hans-Peter arrives in Karen. 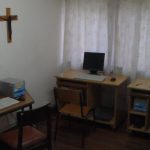 A room within the priory with new computers 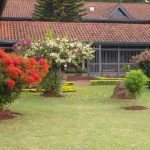 The great garden of the priory 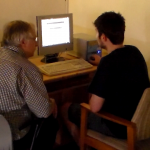