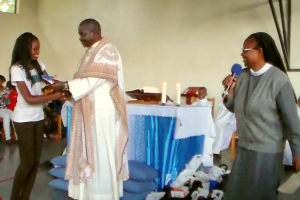 It’s Friday today. The students at St. Scholastica celebrated School Mass in the afternoon, along with the graduates who had received their final grades the day before. Which meant that our Friday Cinema (in the past we’d always brought a movie for the students to watch) which we’d planned to do in the cafeteria had to be canceled – but one of the kids still asked us. “Will we watch a movie today?“. We told him on Friday next week. After Mass, the best student in the graduating class received a Samsung Galaxy Smartphone (kindly donated by Horst “Opi” Iffland, one of Michael’s table tennis friends) as an acknowledgement for her achievements. Sr. Emily had many emotional, laudatory words for both the donating and the receiving party, with Father Mike finally handing over the phone.

In addition to the usual little present (well, Swiss chocolate), Michael had also brought a few nets, rackets, balls, jerseys and shorts with him to put in the table tennis room. So maybe there’ll be an opportunity for a few sessions here and there, just so Michael’s not out of practice when he gets back.

On the computer side of things, it’s all going… well, it’s going the way it’s going. There’s a thin line between frolicking and frustration, depending on which machine or screen we pick up and work on. We were using a hair dryer to “dust off” the interior of the desktop PCs, and HP was able to set up a second server so we could carry out several network installations all at once and save time. Stefan took care of the notebooks (some of which with BIOS in shambles) while Michael, frustrated, decided to give up on the bare bone solutions and dedicate his time to the ACER desktop PCs going to Chesongoch. And all of these installations went off more or less without a hitch. So we’re slowly but surely clearing the second IT room, which looks as though it had only been used for storage purposes lately, and making room for more workspaces.

And we have a new helper too. Joshua, a graduate from the school who is standing in for Sr. Beata in the library. He’s very interested in all computer things, and he’s going to be working, as per HP’s idea, on servicing the systems at regular intervals. The first thing he did was to remove all the Windows labels from the computers, before moving on to providing help with some of the easier issues. HP is going to be briefing him further in the coming week. He’s going to be staying in Ruaraka until September.

Tomorrow is Saturday, and Michael and Stefan will be heading out to Chesongoch at 6:00 AM. So tonight we’ve already packed the car full the stuff we need – 9 computers including servers, keyboards and mice. 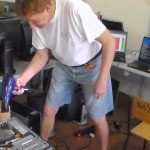 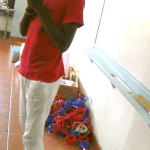 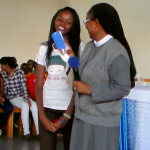 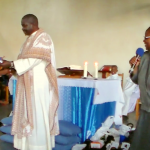 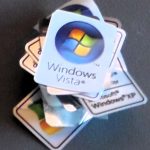