Let’s talk about the weather 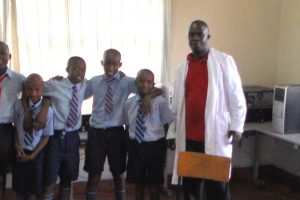 It’s meant to be Summer out here. But it’s just like Europe at the minute, the weather’s bonkers, it’s fairly cold and wet as compared to previous years. Although that’s most likely going to change soon, what with snow starting to fall north of the Equator and all – so yes, things should be back to normal quite soon.

Day 2 started with breakfast at 7:30 (or, in Stefan’s words, “very early”), after which the two computer specialists headed straight over to the IT department to continue installing the server and getting all the old, weary machines to lively up. Charles had organized a few of his students to help us sort out all the cables as well. If we’d had theme music for the whole thing, it would undoubtedly have been the Kansas classic “Dust in the Wind”, as there was plenty of the stuff all over the equipment in storage.

In the meantime, the servers finally yielded to HP’s programming magic, and so we were able to install the first few clients. But we’re behind schedule now, meaning we had to make a new plan – HP won’t be going to Chesongoch (where Stefan and Michael will now take care of swapping out the hardware), instead he’s going to ensure that all the computers in Ruaraka have been checked and sorted. All the machines going to Chesongoch and Karen are also going to be prepared in Ruaraka.

We received word that all the luggage had arrived as well, so Stefan headed out to collect the bags, with Sr. Emily kindly lending an (essential) hand. Michael’s and Stefan’s suitcases were indeed at the airport, and after a quick chat with the customs officer (“Sister. You’re traveling together? What’s in the bags? Clothes? No electronics? OK, go through.“), the two were able to bring them back. Hans-Peter’s luggage, on the other hand, had already been processed by customs at that time and was on the way to the convent, where it arrived a good 7 hours after the other bags had been brought back. Anyway, everyone had clean clothes the next morning, so it was all good.

Some of the computers (especially the “bare bone” solutions) are causing trouble. We have to keep resetting the BIOS to make the installation work. And then small problems keep cropping up during testing, and these can easily take a good 30 minutes to resolve.

During the afternoon, the first teachers joined us in the computer room and we showed them how to use applications such as Wikipedia, the email program and others. HP was especially gleeful when he demonstrated how to plot a y=x² function, while Michael simply had to show them the periodic table of the elements. Stefan and Joshua, a former student at the school, documented the whole thing extensively.

The power went out after that. The first time on this trip. We’re keeping a tally this time round. 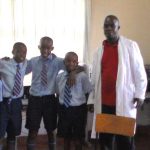 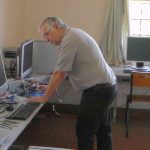