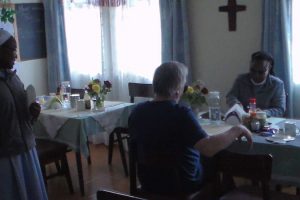 It was just as we’d feared – we were in Nairobi, and our luggage was somewhere else. Despite the fact that everything had started off so well. Our flight out of Zurich took off with about an hour’s delay, but made up for all the lost time on the way to Istanbul, so we touched down more or less as originally scheduled and with a good two and a half hours (lots of time to transfer a few bags, you’d think…) between our arrival and our connecting flight. The entire transfer area at Istanbul Airport has been expanded and done up as well – checking through took us next to no time, no long queues either, so we were able to lay up our feet for a while as we were waiting for the plane to Kenya. We left Istanbul in direction Nairobi after midnight. The plane was full, so we were packed in pretty tight… not much leg room compared to the flight from Zurich either, so none of us slept much.

Now, Turkish Airlines claim to be the best airline in Europe, but that claim doesn’t seem to apply outside European borders, especially not when it comes to on-site luggage handling. That meant Sr. Rosa had to wait at the airport for quite a bit of time, as we had to leave our details with Swissport so they’d be able to locate our bags. Luckily we were third in line (HP and Michael dashing over to the counter as quickly as possible while Stefan kept his eye on the conveyor, hoping for a miracle), and so Sr. Rosa was finally able to “greet” us after about 2 hours.

On we went, driving over a three-lane highway (which even turned into a seven-lane highway at times, courtesy of local traffic) and through the congested streets of Nairobi until we arrived in Ruaraka about an hour later.

Once there in Ruaraka, Sr. Maria and the other Sisters welcomed us in the friendliest way possible, and after being shown to our rooms and eating a lovely brunch, we took a quick trip over to the computer room to take stock. The room looked the exact same it did when Michael had left it at the end of his trip back in 2015. So local IT teacher Charles and Stefan started swapping out VGA cables for DVI cables and adding more memory to all the computers with a lower performance while HP and Michael started re-installing and configuring both the server and the backup – an ongoing task for Day 2.

There was also some discussion as to whether extra room should be made in the second classroom for computers which aren’t intended to be used for IT teaching (how to use computers) but instead within the scope of Edubuntu software application. And we’re going to install three Linux workspaces that use Wikipedia in the teacher’s room, right next to the Windows computers which are already in there (and ready for the scrap heap, really).