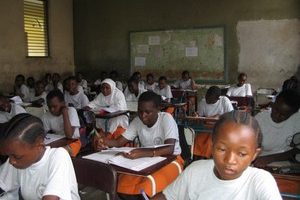 from our local partner Paul Koyi:

Linux4AFRIKA is a project wich is jointly run by German and Tanzania Partners. The project started back in 2006 as a result of a visit to Tanzania by a Consultant Hans Peter Merkel for purpose of training on e- security and computer forensics technologies in collaboration with Agumba Computers Ltd of Dar es salaam, a local partner in Tanzania.

Agumba computers Ltd is a dedicated leading intergrated solutions Provider and re-owned ICT company in Tanzania Located in Dar Es salaam and run by Paul Koyi who is the CEO.

The objective of the Project to promote Open source technology in Tanzania schools particularly to Linux distributions of Ubuntu, Kubuntu and Edubuntu as well as to assist the schools acquire learning computers and related accessories has been well received and perceived by the intended beneficiaries.

The planning for the project activities started back in October 2006 by identifiying the would be beneficiaries of the project including Secondary schools, health centres, small businesses initiatives and Community development groups. The following were identified and selected for the pilot project take off:

The second initative planned was to promote the project to the selected benefciaries which was sucesfully done between February and June 2007 in order to inculcate the essence of using open source software as an alternative to expensive propriptieary software with regular licences costs.

Collection of used computers (about 200 PCs including routers, servers , switches and school materials) for assistance was succesfully achieved by our Partner FreiOSS.net of Germany in June 2007 and container for the stuff was accordingly shipped in August 2007. Agumba Computers Ltd took the lead and Paid for the shipping charges of the container from Germany to Dar es Salaam.

The container safely arrived in Dar Es salaam early September 2007, and already has been cleared from the customs. The goods are now stored and kept under the custody of Agumba Computers Ltd while waiting for distribution and delivery to the beneficiaries. (The pictures below shows the labourers offloading the container at the storage site in Dar es Salaam and the other picture depicts the e computers packed in the store where they are currently kept)

On 10th October, 2007 had a visit of linux magazine jounalist Mr. Markus Feilner from Bavaria Germany, whom together we visited Dr. Didas secondary school in Chanika area, southern Dar es salaam city. We were able to have a short interview with the School Headmaster Mr. Abdallah Henku and IT teacher of the school Mr. Kott (See the pictures below).

Plans are underway to hold a meeting of all beneficiaries to officillay inform them on the arrival of donation and discuss logistics for the distribution. Beneficiaries are expected to be requested to contribute towards delivery costs of the Computers and other related donation to their respective centres and schools.

Linux4Afrika Project is optimistic to see a future Africa where IT technology resources will be properly deployed towards the development of its people through a true cooperation of developed and developing world to bridge a digital divide and achieve mellinium goals for development through affordable means and in the effective manner.